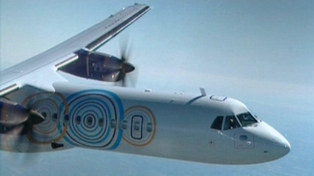 Aer Arann – Revenue withdraws objections to survival
The High Court has approved in principal a survival scheme for Aer Arann which has been in examinership since August.

The decision follows the withdrawal of objections to the scheme by the Revenue Commissioners after it was agreed that Revenue debts will be paid over 18 months.

The decison also paves the way for an additonal €2.2m investment in the company.

A HIGH Court judge has expressed “serious and significant concerns” about a proposed survival scheme for Aer Arann and has adjourned to next week the company’s bid to secure the court’s approval of the scheme necessary to exit examinership.

The Revenue Commissioners have objected to the scheme, alleging they are being treated unfairly as they will receive a smaller dividend than other creditors.

Yesterday, Ms Justice Mary Finlay Geoghegan said she had “great concerns” over the scheme of arrangement put together by Aer Arann’s examiner, Michael McAteer of Grant Thornton, which was before the court for approval. Issues around proposed new investment needed to be clarified and there was also insufficient information about the terms on which creditors were to be paid, and when this was to happen, the judge said. She was also concerned that a statement of affairs, listing the airline’s assets and liabilities, had not been included in the proposals put before the court.

The issues she was raising were “very, very serious” and needed to be addressed because the court could not approve the scheme unless it was satisfied the airline has a reasonable prospect of survival as a going concern, she said.

The scheme, which has secured the approval of nine of 12 classes of creditors, will see some creditors receive all the money owed to them while other creditors, including the Revenue, will receive no more than 22 per cent of what they are owed. The airline’s creditors are owed some €29.5 million, with Allied Irish Banks, the largest creditor, owed €5.2 million

As part of the survival scheme, €3.5 million from a group comprising UK transport company Stobart and Galway businessman Pádraig Ó Céidigh, the airline’s owner, is to be invested in the company.

Of that initial investment, €1.8 million will be paid to creditors, €400,000 will go towards fees for the examinership process and the balance will go towards working capital.

Ms Justice Finlay Geoghegan said there were a number of uncertainties in the scheme as proposed, including about investment and payments to creditors.

Jennifer O’Connell, for the Revenue, said its concern was that other creditors, such as Aer Lingus and the Dublin Airport Authority, were being paid all they were owed while Revenue was to receive considerably less.

Rossa Fanning, for the examiner, said his client would address the issues raised by the judge on Monday. If the modifications sought by Revenue were put in place, it would effectively put the airline into liquidation. The case was adjourned to Monday.

We use cookies to ensure that we give you the best experience on our website. If you continue to use this site we will assume that you are happy with it.OkPrivacy policy
Scroll to top